Your Vircadia VR experience is made realistic with the help of a physics engine. Vircadia uses this engine to simulate an object's behavior according to the Newtonian laws of physics. For example, if you hit a ball with a bat in Vircadia, the physics engine computes these movements and makes the ball spin away from the bat after collision. You can modify an entity's physics behavior using the Create app.

You can select and edit multiple entities at once. The behavior will be different based on the type of property you'd like to set:

Apply Physics to an Entity

To apply physics properties to an entity: 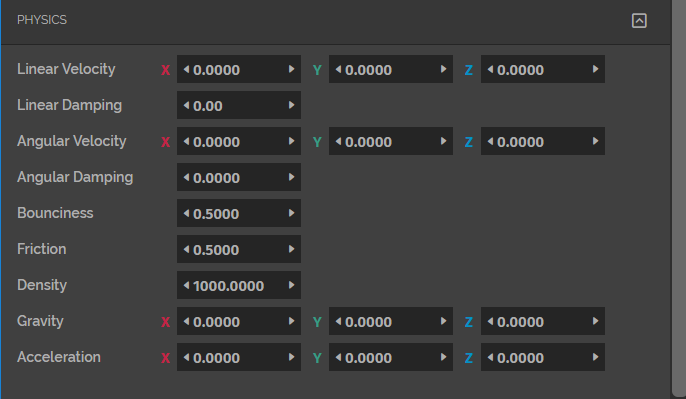 Velocity is the speed of an object in a certain direction. All entities that have a position and orientation in Vircadia will have linear and angular velocity. These velocities might be zero, but they still exist.

Angular velocity is the speed at which an object is rotating in a certain direction. It is measured in degrees/second. To change an entity's angular velocity:

In Vircadia, damping represents how much of an entity's linear or angular velocity is lost over time. All moving objects we see in the real world experience some friction with air, reducing their velocities over time. Damping is used to approximate this effect of the real world in Vircadia. So if the damping of an object is 0.00, it will not lose any velocity and it will not slow down. If the damping of an object is 1.00, it will lose all its velocity and stop immediately. If you want to throw a ball and have it slow down over time, you can add a damping value to do so.

To set the linear damping of an object:

To set the angular damping of an object:

Set an Entity's Friction and Bounciness

When a dynamic entity collides with another entity, it can react in a number of ways depending on its physics properties. The values you set for friction and bounciness determine this reaction. By default, both values are 0.5000.

Friction is a measure of how slippery an object is. When an entity with low friction collides against another object, it will slide a good distance before coming to a stop. On the other hand, an entity with high friction will slow down much faster. To set the friction of an entity:

Bounciness is the energy an entity conserves during collision. For example, a ball will conserve more energy and bounce more than a heavy cube. To set the bounciness:

In Vircadia, the maximum (10000) and minimum (100) values of density were chosen for stability. It's difficult to perform stable physics calculations between objects of very disparate masses (such as a light feather and an iron ball). To help keep the environment stable, we picked conservative density limits.

To change this value, scroll down to the 'Density' property in the 'Properties' tab. Change it to the value of your choice.

Set How an Entity Moves in a Gravitational Field

In the Create app, 'Gravity' is the acceleration of the entity, as if it were in a uniform gravitational field. This property controls how an entity behaves when you change the gravity of a domain. For example, if a ball is floating in zero gravity, it will float downwards when you increase gravity downwards.

To change this value, scroll down to the 'Gravity' property in the 'Properties' tab. Change it to the value of your choice.